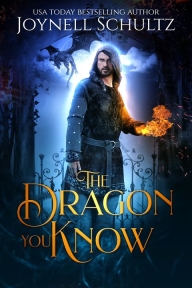 This series also contains the spin-off, The Dragon You Know, which is has a bit more darker and adult feel than the main Quarter Witch Chronicles series.

It can be read alone or chronologically in order with the above series. Find it on Amazon here.

On the outside, Ruby’s a normal college student.

On the inside?
She’s something else completely.

Magic runs through her veins, tempting her to use it, but Ruby isn’t sure how to control her new powers…until Ty, a dangerously handsome man from another world, spots her and identifies her as a witch. He offers some answers, but they come with a cost.

Not only does using her powers make her a target to others trying to steal her magic and slay her pet dragon, but each act of magic must be balanced—and magic takes whatever it wants.

Is all the chaos caused by casting a few spells to ruin her ex-boyfriend’s perfect skin worth it?

You’ll love this new adult urban fantasy series because it has everything you want to read about: magic, witches, dragons, romance, and a bit of good old-fashioned mischief.

Books in the Series:

Read the first 3 chapters below…

Here’s the first chapter of Dragons are a Girl’s Best Friend. 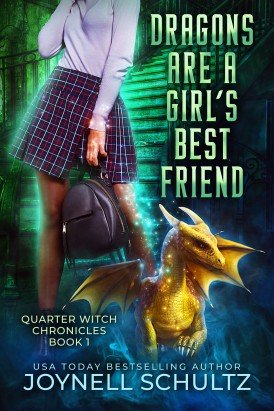 “I don’t think you should sell the house.” Geoff tossed his long brown bangs off his forehead and plopped down on one of the few pieces of furniture remaining in the Victorian home I grew up in.

“Sure, now you say something.” I crossed my arms over the giant pi sign on my t-shirt and playfully narrowed my eyes at him and shrugged. “You’re too late. Besides, what’s an eighteen-year-old going to do with a house, much less this monstrosity?”

“If only one of us had an extra thousand dollars a month lying around to help me cover bills. I don’t have much of a choice. You and I are moving to Bloomington later today, and there’s no way I can pay both the bills and my college tuition.” I dropped down onto the sofa next to my boyfriend of three years.

Geoff wrapped a thick arm around my shoulders and twisted strands of my long, amber-colored hair around his fingers. “Didn’t your mom leave you some money?”

“Sure, but I have college to pay for.” Especially out-of-state tuition, but I didn’t say that. Going to Indiana for college was ultimately my decision—even if it appeared that I was only following Geoff’s lead.

Two men from the Salvation Army stumbled down the stairs, carrying an old oak desk from my mom’s office. As I watched the piece of furniture being taken away so carelessly, memories of sitting on my mom’s lap at that desk while she balanced the checkbook flooded my head. She’d give me a piece of her fancy stationery to scribble on while she crunched her numbers. My heart ached with emotions I thought I had finally gotten a grip on since she died four months ago.

“Ruby, are you crying again?”

I wiped my eyes, snuggling into Geoff’s side while he guided my head onto his shoulder. I don’t know how I could have gotten through the past four months without Geoff. He was something stable in my life. We dated for almost our entire time in high school, and during the past year or so, when my semi-normal life dissolved into something I no longer recognized, Geoff was beside me every step of the way. I had lost my mom, moved out of the only home I knew, and was in the process of going away to college.

Oh, and did I mention I discovered I was a witch?

Not really a witch, I guess. I was mostly mortal, but still had one-quarter magic blood which was still unique because powers were a thing of books and movies, not real life. The man who supposedly was madly in love with my mom nearly nineteen years ago was half witch, but he took off, disappeared into thin air soon after Mom told him she was pregnant with me.

Mom always showed me the bright side of her situation: that she got me out of the deal, but as I grew older, I realized she had been hung up on my biological father for the rest of her life. She never got married, but had a live-in boyfriend for most of my childhood until that fizzled out when he finally asked her to marry him. She said she never stopped loving Dad.

Sure, I loved Geoff—at least we said we loved each other—but I couldn’t imagine forgiving him if he took off on me, leaving me to raise a child by myself. Mom was just that compassionate.

I wiped my tears again, snuggled deeper into Geoff’s side. “I’m sorry. I’m just missing Mom right now.” Even though Geoff gave me sympathy, he didn’t know what it was like to not have parents. With my absent father, it had always been Mom and me…up until she died of breast cancer. Since then, it was like a huge part of me was gone. “Actually, I miss her all the time.”

Another Salvation Army volunteer came down the steps, carrying an old chair that sat in the corner of my mom’s bedroom.

“You’re getting rid of the green chair?” Geoff pulled away from me, letting me sit alone on the cold sofa. “That chair is awesome! I want it.”

Geoff had already collected dozens of things from my house after Mom died. There was no way all that stuff would fit into his dorm, but who was I to stop him? I was giving it all away, anyway. “Take it. I hated that eyesore.” But as I watched some oil paintings, a bookshelf, and a bedframe go out the door, small parts of my heart went out with each piece. “Maybe we should go somewhere else.” Somewhere that I didn’t have a view of the front door.

A noise came from upstairs, and as I turned, I caught a glimpse of one of Mom’s paintings fall out of a volunteer’s hands and tumble down the stairs along with a glass mirror. The edge of the painting frame hit the railing of the stairs, taking a chip out of the finish, and when the mirror shattered against the painting’s delicate canvas and the picture turned over, giving me a glimpse of Mom’s favorite painting—the one that hung right over her bed—my heart nearly leapt out of my chest.

The painting of the elephant balancing on a beach ball fell in slow motion with glass shattering all around it. The animal tumbled feet over head down the steps, as the glass scraped the picture.

Magic prickled my skin, crawled up my arm, and filled my core with power and confidence. I focused the power towards the painting to stop it from rolling down the stairs and being destroyed further.

And like most times I tried magic, it didn’t work.

Heck, I only got magic to work a few times before, and if it weren’t for those instances, I’d never have believed my mom’s last delusions. There was no magic in the world. I had spent hours and hours searching the internet for anything on magic and witches, but was left with nothing substantial, yet I know the medallion was an object that helped me do magic—sometimes.

The painting fell off the bottom stair and laid face up with a big rip down the center of the elephant.

“That’s enough!” I sprang to my feet, surprised at the emotion in my voice. I wasn’t ready for this. Four months wasn’t enough time to heal. From the kitchen, the two men who had the dresser were now carrying out the kitchen table, and I completely lost it. “Stop! That’s enough. We’re done.”

“Leave the table. Leave everything. I’ll call you back when we have a buyer for the house.” Which wouldn’t be long, the real estate agent assured me. Apparently, the market was hot for big Victorian homes in this neighborhood due to the community college nearby. Why hadn’t I chosen to go there?

That answer was easy. It was because Geoff was going to the college out-of-state, and I didn’t want us to separate. Considering the circumstance with my mom, I couldn’t take being alone right now, and I couldn’t afford the house.

“But the truck’s only half full.” The head volunteer readjusted his dirty baseball cap. “At least let us get the piano out of here for you.” He pointed to the upright piano in front of the picture window.

I shot him a don’t-mess-with-me look, and he backed down, rounding up his coworkers and heading outside. I locked the door behind him.

“What was that?” Geoff sat down in his new green chair, rubbing his hands down the wooden armrests.

I swallowed my thoughts. “Nothing. I just thought we should have some furniture here until the house sells.” It was a lie. A complete lie, and I didn’t mind telling it.

Geoff shrugged, his hair falling over one eye. “Let’s get going then. We have to make the trip to our dorms.”

I knelt and picked the glass away from Mom’s painting, pulling the canvas off the frame and carefully rolling it up. Could it be fixed with tape? Sure, it was just a print and I could order a new one, but this was the one my mom’s hands had touched.

My legs were heavy as I tried to stand and follow Geoff out of the house. A little scrape in the hardwood floors drew my eyes. I accidentally scratched it when I tried to sneak a TV up to my bedroom one night. More memories rushed back to where Mom hung a coat rack on the wall, but missed the beam and left a hole in the drywall. Of where thick, ugly yellow curtains once hung that we picked out together. Of the stain on the carpet that I swore was caused by my imaginary friend for years until I grew up and realized there were no such things as dragons. Sorry, Luke. The memories were too much, and my chest constricted.

When Geoff left the house, I cast my eyes to the ground and followed along. It was best that I sold the house. I didn’t need to be haunted by memories of Mom, though I tucked the print tightly under my arm. I wasn’t giving this one up.

I was an adult, and many adults lost their parents. They all functioned just fine.

What was wrong with me?

It was time I grew up.

I was going off to college.

I was starting a new life.

And I was going to learn how to use my magic.

END OF CHAPTER 1 – Thank you for reading!