For a change of pace, here is a flash fiction piece I wrote, but felt was too dark to do anything with.  It was collection electronic “dust”,  so I thought it fits with Earth Day.  A *WARNING* though – there is blood and deer hunting in the story. 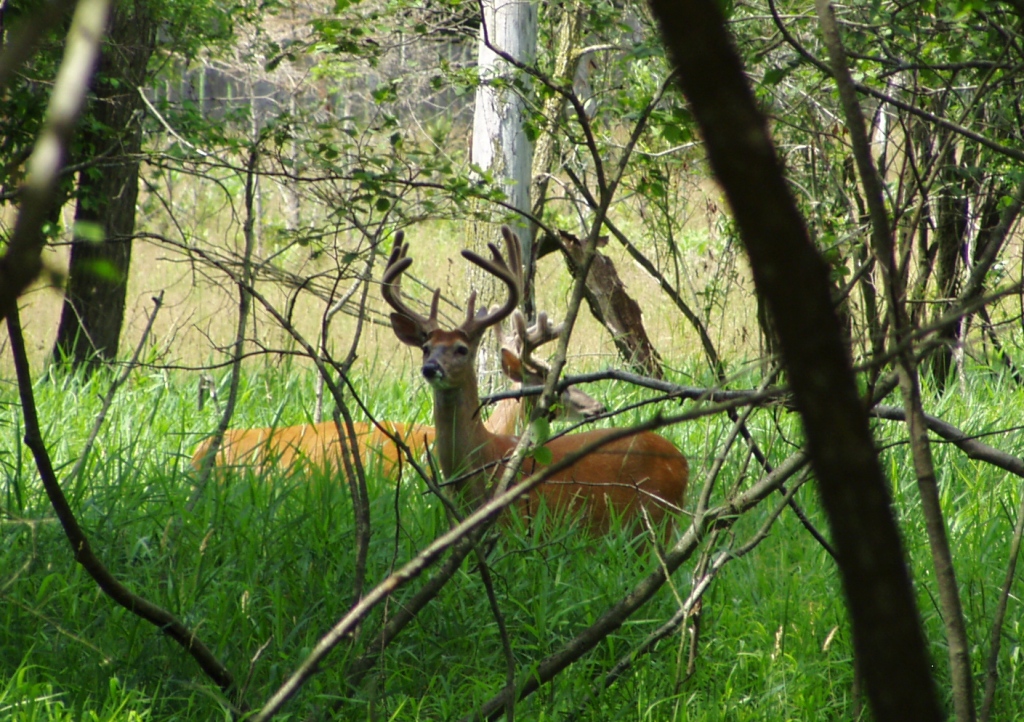 I wiggled my fingers, they had been numb for hours already. I wiggled my toes. Six hours of sitting in one spot, shivering, and waiting for a non-existent deer. Six hours wasted except for the intricate pattern of diamonds, slashes, and dots I carved in the branch near me to pass the time.

That’s enough.  I unloaded my gun and began to climb down the tree when my foot slipped into a loop made by a vine.  Once I struggled free another vine wrapped around my other ankle.

What was happening?  I withdrew my hunting knife and cut myself free, then quickly descended the tree.

Now that I finished hunting, I noticed the fresh deer tracks besides mine in the snow. How did I miss this deer?  With my rifle slung over my shoulder, I pushed a few branches out of my way to follow the tracks further into the woods.  The tracks turned down a runway and when I looked ahead, I saw him.

He was largest deer I had ever seen outside a hunting magazine. He had at least eighteen points on his massive antlers. I cautiously pulled my rifle from my shoulder, put the deer in the crosshairs, and pulled the trigger.

Damn, I had unloaded the rifle. I slowly pulled the cartridges from my pocket and dropped one into the chamber. I only took my eyes off the deer for a second, but when I looked up, he vanished.

I pushed my way forward a little more, following the runway. At least I was warmer now that I was walking.

Around and through the woods I crisscrossed until dusk settled. I turned back, knowing it was too late to hunt anyway. I followed my footprints in the snow and soon they ran into a thick area of the forest. I pushed through the thorny brush that I didn’t remember. I kept following my footprints and soon the forest was so thick that my trails wasn’t visible.

I pulled out my phone to see the GPS, but I didn’t have reception. I unhooked the small compass pinned to my orange vest, and found north. My car should be that way. I wound myself through the woods in that general direction.

The branches and vines seemed to grab me. I pushed forward, breaking through them. They became so thick I couldn’t move. They held me tight. I felt pain in my arm. The thorns were pressing into me – cutting me. I struggled my hand loose to find my knife, but it was gone. The pain overwhelmed me and the world went black.

I woke in bloody snow. The trees and the vines had receded and now were nothing out of the ordinary. My arm throbbed and I looked down to see a familiar pattern of bloody diamonds, slashes, and dots.

Disclaimer:  I don’t personally hunt, but have no issues with it done correctly (My husband and father enjoy hunting.). Many times, hunters are the best conservationists.